WoDEF - World Day for the End of Fishing calls for the abolition of fishing and fish farming. Fish, crustaceans and cephalopods are at the heart of WoDEF's concerns, since they constitute the biggest proportion of animals killed by humans, amounting to thousands of billions of victims each year. Launched in 2017 in Switzerland by the association PEA - Pour l'Égalité Animale, WoDEF is now used by associations all around the world to raise awareness about aquatic life, among the public as well as within other animal-rights associations. Read the WoDEF's demands in detail.
> Announce your event here
> See how you can take part

Online | 27.03 Publications by Campaigns and Activism for Animals in the Industry (CAAI)

Sandton | 27.03 Cyberaction by Women of the World united against Taiji

Bristol | 27.03 Vigil by Bristol Animal Save

Zambia | 27.03 Vigil by Animal Save Zambia
Announce an action

Together, let's push for the closure of aquaculture farms!

This year, the World Day for the End of Fishing proposes to organize actions targeting aquaculture farms, which are a source of intense suffering for a very large number of individuals.

> More info on this issue

The Covid-19 health crisis obviously disrupted 2020. All around the world more than a hundred events were planned in public spaces in order to highlight the cause of aquatic animals and demand an end to massacring them. Despite this dramatic situation, an appeal by the international coordinators and the founder associations, Pour l'Égalité Animale and La Question aquatique, resulted in massive virtual support. More than 200 people created and shared placards and original messages demanding the end of fishing.  Here is a selection.

Before the pandemic, actions were being organised in Australia, Belgium, Brazil, Canada, Colombia, Finland, France, Germany, Japan, Mexico, the Netherlands, New Zealand, Peru, Portugal, Spain, the United Kingdom, the United States and, for the very first time, in Russia and Switzerland.  Online campaigns were already being set up, as they are each year. 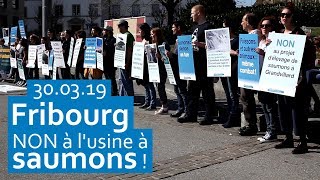 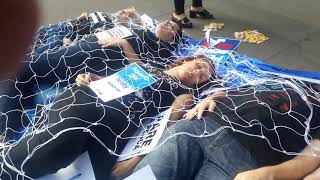